Bodalla to Nerrigundah - a ride with history

This ride, and Ride 18, commence from Bodalla, a few kilometres north of Narooma on the Princes Highway.

Bodalla is a small town. It was established in the 1870s by Thomas Sutcliffe Mort (of Goldsborough Mort fame) who introduced refrigeration to the transportation of fresh foods to the larger centres of Sydney and beyond. He established the Bodalla Cheese factory. The name is still well known, although Bodalla cheese is no longer made here. Mort ran a dairy on about 5000 hectares, but that original property was progressively subdivided and reduced to individual farms.

Despite the original cheese factory now closed, dairying continues in the region. South Coast Cheese has been established, with counter sales, and the Bodalla Cheese Factory being built at the time of writing.

There are some buildings of historic interest in the town. The All Saints Anglican Church—a large stone church on the northern side of the town—is listed on the National Trust register. The church was erected by the Morts as a monument to Thomas Sutcliffe Mort and his wife.

On the southern side of Bodalla, there is another historic church, a shingle-walled building that was erected in the mid-1880s.

There’s more to Bodalla than one would expect by just driving quickly through the town. In addition to the outer lying farming communities and residential developments, in the town there is a restaurant, the Postmasters Gallery (at the site of the former post office), and one or two craft shops.

There is a road from Bodalla to the coast at Potato Point, with access to lakes from that road.

There's more to Bodalla than one would expect by just driving quickly through the town. In addition to the outer lying farming communities and residential developments, in the town there are a couple of restaurants, the Postmasters Gallery (at the site of the former post office), and one or two craft shops.

This is a bike ride with history. An early Australian poet, an abandoned gold mine, a monument to a police constable who was shot by bushrangers in 1866 ...

For this ride, take a good map.

Take all food and refreshments, as there are no facilities along the way.

The first part of this ride passes through quiet countryside—usually green fields, with the Tuross River nearby for much of the way.

Monument to the poet Charles Harpur

About nine kilometres along the road, there’s a road to the right (Nerrigundah Mountain Road). Stop there for a few moments and look for the monument on your left. The monument—a granite boulder with a bronze plaque—was erected in the bicentennial year (1988) to commemorate Charles Harpur, Australia’s first native-born poet. With the growth of grass and other vegetation around the monument, it seems that poor old Charles has again been forgotten.

Continue on straight ahead. You can return via the Nerrigundah Mountain Road if you don’t mind a hill or two.

The road changes to a gravel surface that is usually in quite good condition, but this is not always so. The condition of the surface depends on whether it has rained in recent times.

On a bend in the road, there’s the property ‘Tyrone’. You will come across this name later. Coman, who developed Comans Mine, owned this property in the 1800s.

The next twenty kilometres make for easy cycling—it’s a reasonably flat stretch of road, very scenic with views of the Tuross River and its wide, sandy bed.

Along this stretch of road, there are several roads going off it—Cheese Factory Road, Reedy Creek Road (you will encounter this one if you go on Ride 18), Tuross River Road, Cadgee Mountain Road to the right, Cadgee Road on the left, and then you are in Nerrigundah.

The town of Nerrigundah was settled in the early 1800s and became popular because of the gold rush—a short-lived event but profitable for some miners. Today it is a very small settlement, a mere remnant of its former size.

There is a monument to Miles O’Grady, the police constable who was shot by the Clarke brothers, a gang of bushrangers who frequented that area and further up the escarpment without mercy to their victims. Miles O’Grady, it seems, put up quite a struggle to apprehend the Clarke brothers, but died during their capture. The stone monument is there to tell the story of his bravery. His name, and his act of bravery, are still remembered today.

From here, there is a ten kilometre extension to this ride to Comans Mine—an interesting and significant site in the area’s history. This extension involves a five kilometre climb, with a beaut five kilometre fast ride down again to Nerrigundah. But the site of the old gold mine and its relics are worth the climb.

To get to Comans Mine, turn right at the monument and continue along that road. Turn right at the sign at the T-junction. The first kilometre or so of that road is of a reasonable gradient, but it gets steeper.

The track to the mine is a little under five kilometres from Nerrigundah, just where the road levels off a little. Look for the sign and the car park on the left. The mine is about 600 metres along the track.

Do not ride along the track to the mine. The ground is fragile, and needs to be treated carefully.

Relics of the mining days

There are relics of the mining days—the crushing battery, the steel tracks along which small carts full of ore were pushed, and some of the carts themselves are still there. And at the end of the track there is the small dam used by the miners. This is a very pleasant spot for lunch. There’s rainforest vegetation, and it’s always cool and shady.

Return to Nerrigundah the same way that you came—it’s downhill for nearly five kilometres.

To return to Bodalla from Nerrigundah, there are a couple of options.

The first—and easiest— is to retrace your steps along the riverside road. It’s fairly flat most of the way.

The second option is to return via Nerrigundah Mountain Road. This road is about ten kilometres shorter than the riverside road, but there is a hill between Nerrigundah and the Eurobodalla Road. Nevertheless, the mountain road is scenic, with interesting vegetation along the way, not to mention the views. 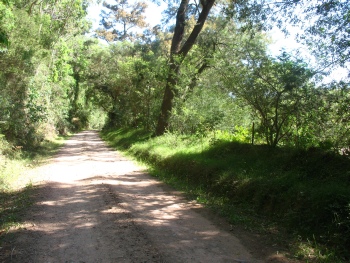 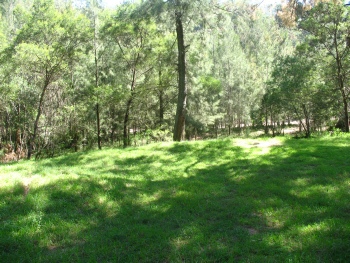 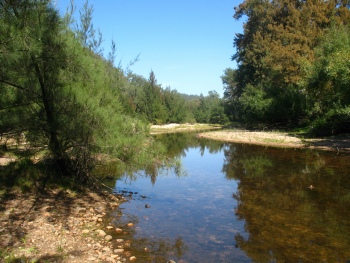 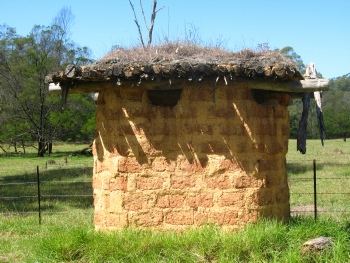 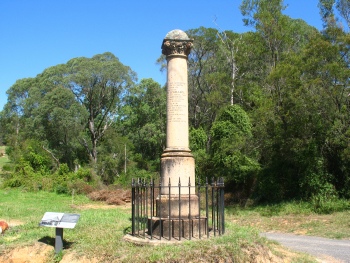 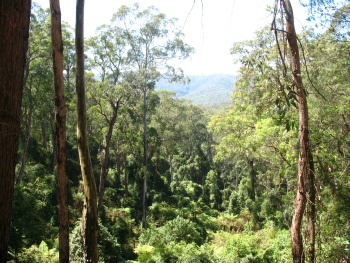 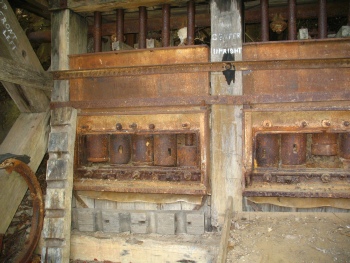 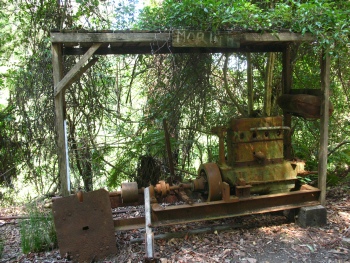